This past weekend, I had the chance to attend COSine 2012 here in Colorado Springs. This convention is a cool get-together for lovers of science fiction/fantasy/steampunk or just those who love good books and like to play dress up. It's put together by the scifi fan group First Friday Fandom. You can visit their page here.

Given that the event was in my neck of the woods (read: extreme accessibility), I couldn't pass it up. I even managed to talk some writer friends into coming along with me. Here are some pics from the event. 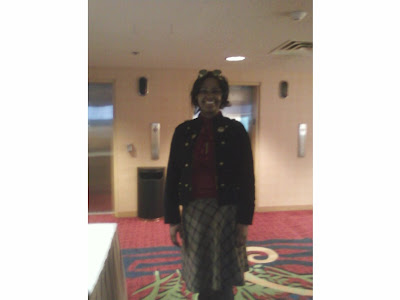 This is me in my steampunk outfit, similar to what I wore to the Oklahoma Steampunk Expo last year. I'm hoping to expand my wardrobe in time for the next convention. Anyone know a good place to buy an affordable corset and long Victorian skirt? 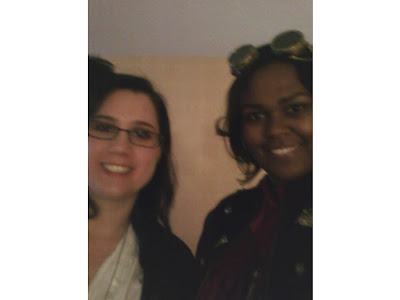 This is my cool friend Evangeline. She's also a writer and loves to go steampunk. Evangeline and I bonded because we write edgy inspirationals and we really want to get more speculative fiction (and stories containing those elements) into the CBA market. Check out her blog here for your dose of humor and a glimpse into her world. 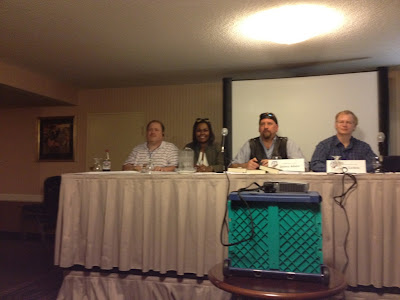 Ok, this shows that God has a sense of humor. Here I am participating in a steampunk panel. I just walked into the room thinking, "Oh, I'm gonna hear some good stuff on one of my favorite topics today", and these guys basically asked, "Is there any woman here who writes steampunk?" Since there were only two women in the room at the time, Evangeline and myself, we told them that we didn't have anything published yet in the genre. "Well, are you published?" One of the guys insisted. That's when Evangeline said that my book would be releasing this year. To which the gentleman said to me, "We need a female perspective. Come up here." Ok....

So I was nervous at first. I just came from a panel where some of the same guys were discussing hard-core sci fi, and I mean quantum physics, the parameters of time travel, H.P. Lovecraft dissertations. You know, the heavy stuff. But I read steampunk for the aesthetic and the romanticism. Don't ask me about the mechanics of boiler engines! My mind pleaded.

Turns out, the questions on the panel were ones I could address. And my fellow panelists were friendly. They wrote steampunk for the same reasons I did. Well, maybe less romanticism because they're men. Not saying that men can't write romance...OK, before I completely dig a hole for myself. Moving on.

I ended up having a great time, met writers, and even got invited to speak on the steampunk panel again next year. By that time, I plan on increasing my steampunk knowledge and hopefully, have a few short stories out there for that market.

Later on, COSine put on a Cowboys and Aliens Masquerade Ball, complete with square dance callers. 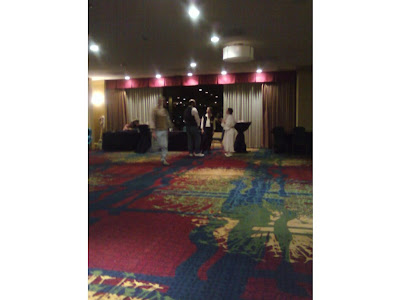 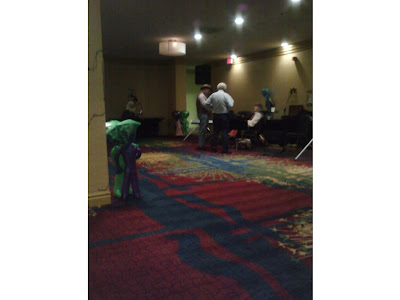 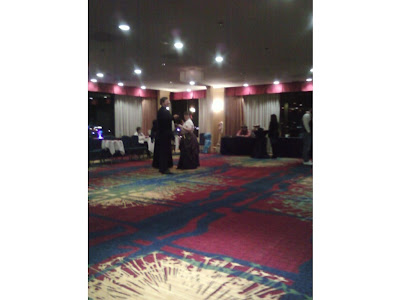 And of course, I couldn't miss a chance to indulge in my boot fetish. 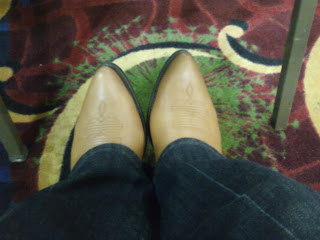 Every girl should have at least one pair of cowboy boots. I got these in San Antonio in the same little shop where Johnny Cash used to buy his. Six degrees of separation, yay! Unfortunately, there was no request for "Walk The Line".

Well, that was my fun this weekend. I got a chance to connect with other writers and made new friends along the way. I'm thinking of doing another convention next month. GalaxyFest is having a steampunk tea party...maybe I can whip a new steam persona up in time.

Have you attended a convention? What kind?