Well, we made it to Georgia. It's hard to believe that we pulled a few stunts getting here, most of them having to do with driving. Hubby and I packed two cars(one was a rental) with suitcases, food, and houseplants that I couldn't bear to part with. The drive was approximately 1,410 miles long. Since we were both driving a car and we had our furry, high-sprung child in tow, we planned to make it a three-day trip instead of two.

Turns out we kept our big feet on the pedals for thirty-eight hours, stopping only to sleep one night at a Motel 6. The dog was behaving very well, thanks to a good dosing of calming tablets, so we decided to gun it to Georgia on that last day of travel. We arrived at our destination at 3AM. In our enthusiasm, we failed to realize that the rental office wouldn't be open until nine in the morning. We had 6 hours to kill until then. Not wanting to spend extra money for a brief stay at a hotel, hubby and I decided on an early breakfast at Denny's and a walk around Wal-Mart. It was a looong morning.

Finally, the rental office opened and we were able to pick up our keys. We were so happy to be in our new home, we didn't care that we had no furniture to sit on.

Of course, after a few days of sleeping/sitting/eating on the floor, you realize this gets old. Real old. Yes, the military foots most of the bill for relocating its people, and that does have its perks. Here's the quirk: We spent nearly two weeks waiting for the truck to deliver our household goods.
﻿
Our furniture and other trappings did arrive eventually. And, boy, we welcomed those beat up boxes like long-lost loves. 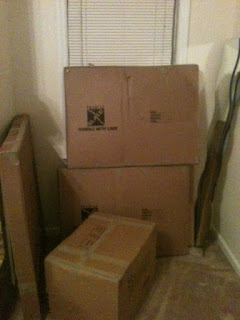 We got to unpacking quickly. Our inventory was roughly 90 boxes, not counting the furniture, so it's going to take a while to dig out from under all that cardboard.

But we -okay, I- handled the important stuff....

Lesson learned? When we move again, we will upgrade our little Chevy Aveo for a larger vehicle, so we can take turns driving instead of tailing each other on the interstate with walkie-talkies. Not to mention so we can pack more food and clothing in case the moving truck doesn't make it on time.

Back to the upside of life. In the couple of weeks since we moved, I can honestly say that things are coming together. We live in a safe, quiet neighborhood where I can walk Noodle and go out for a morning jog. The locals are giving me a great introduction to southern hospitality. Aside from the heat and humidity that I will have to get adjusted to, Georgia is a beautiful state. I don't have Pikes Peak from my bedroom window anymore, but at least I have this in my backyard. 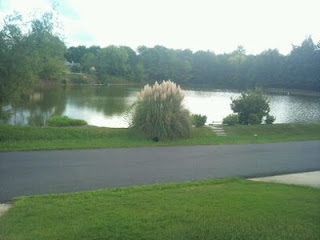 The dog thinks it's a swimming hole/storage container for aquatic and semi-acquatic food. I think it's just the place to sit down and do some writing.

Join me this Saturday at Novel Rocket where I'll be guest posting. The topic: Writing on the Move.


How far was your last move? Across town? Across the country? I'd love to hear your experience.
Email ThisBlogThis!Share to TwitterShare to FacebookShare to Pinterest
Newer Post Older Post Home