I'm pleased to announce that my friend and fellow writer Anne Elisabeth Stengl has brought a new addition to her Tales of Goldstone Wood YA fantasy series. Introducing GODDESS TITHE, the first novella set in the Goldstone Wood universe!

When a stowaway is discovered aboard the merchant ship Kulap Kanya, Munny, a cabin boy on his first voyage, knows what must be done. All stowaways are sacrificed to Risafeth, the evil goddess of the sea. Such is her right, and the Kulap Kanya's only hope to return safely home.


Yet, to the horror of his crew, Captain Sunan vows to protect the stowaway, a foreigner in clown's garb. A curse falls upon the ship and all who sail with her, for Risafeth will stop at nothing to claim her tithe.


Will Munny find the courage to trust his captain and to protect the strange clown who has become his friend?


GODDESS TITHE also features full-page illustrations all done by Anne herself. She is one talented lady! Take a look for yourself. 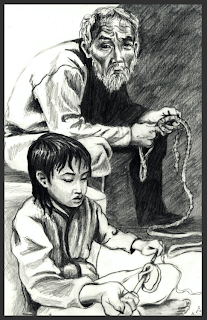 Here's what she has to say about illustrating her novella:

There are eight full-page illustrations in Goddess Tithe featuring various characters and events from the story. This is the first one in the book. I decided to share it with all of you since it depicts my young hero, Munny the cabin boy, under the watchful eye of his mentor, the old sailor Tu Pich. Munny is on his first voyage, and he is determined to learn all there is to know about a life at sea as quickly as possible. Thus we see him utterly intent upon the knot he is learning to tie. Tu Pich is old enough to know that no sailor will ever learn all there is to know about the sea. Thus he looks on, grave, caring, and perhaps a little sad. He might be looking upon his own younger self of many years ago, fumbling through the hundreds of difficult knots his fingers must learn to tie with unconscious ease.

I enjoyed creating all the illustrations for Goddess Tithe, but this one was my favorite. I love the contrasts of light and dark, the contrasts of young and old . . . youthful intensity versus the perspective of age.


Excerpt from the Story:


Here is an excerpt from the middle of the story. In this scene, Munny has been ordered to Captain Sunan’s cabin to clear away his breakfast . . . an unexpected task, for a lowly cabin boy would not ordinarily dare enter his captain’s private quarters! Munny hopes to slip in and out quietly without attracting the captain’s notice. But his hopes are dashed when Sunan addresses him, asking how their strange, foreign stowaway is faring:

“And what do you make of him yourself?”


Munny dared glance his captain’s way and was relieved when his eyes met only a stern and rigid back. “I’m not sure, Captain,” he said. “I think he’s afraid. But not of . . .”


“Not of the goddess?” the Captain finished for him. And with these words he turned upon Munny, his eyes so full of secrets it was nearly overwhelming. Munny froze, his fingers just touching but not daring to take up a small teapot of fragile work.


The Captain looked at him, studying his small frame up and down. “No,” he said, “I believe you are right. Leonard the Clown does not fear Risafeth. I believe he is unaware of his near peril at her will, suffering as he does under a peril nearer still.”


Munny made neither answer nor any move.


But he was interrupted by a sudden commotion on deck. First a rising murmur of voices, then many shouts, inarticulate in cacophony. But a pounding at the cabin door accompanied Sur Agung’s voice bellowing, “Captain, you’d best come see this!”


The Captain’s eyes widened a moment and still did not break gaze with Munny’s. “We’ll keep him safe,” he repeated. Then he turned and was gone, leaving the door open.


Munny put down the pot he held and scurried after. The deck was alive with hands, even those who were off watch, crawling up from the hatches and crowding the rails on the port side. They parted way for the Captain to pass through, but when Munny tried to follow, they closed in again, blocking him as solidly as a brick wall.


Fearing he knew not what, Munny ran for the center mast and climbed partway up, using the handholds and footholds with unconscious confidence. Soon he was high enough to see over the heads of the gathered crew, out into the blue waters of the ocean. And he saw them.


They were water birds. Big white albatrosses, smaller seagulls, heavy cormorants, even deep-throated pelicans and sleek, black-faced terns. These and many more, hundreds of them, none of which should be seen this far out to sea.


They were all dead. Floating in a great mass.


Munny clung to the mast, pressing his cheek against its wood. The shouts of the frightened sailors below faded away, drowned out by the desolation of that sight. Death, reeking death, a sad flotilla upon the waves.


Munny looked down to where Leonard clung to the mast just beneath him, staring wide-eyed out at the waves. “How could this have happened? Were they sick? Caught in a sudden gale? Are they tangled in fishing nets?”


There was no fear in his voice. Not like in the voices of the sailors. He did not understand. He did not realize. It wasn’t his fault, Munny told himself. 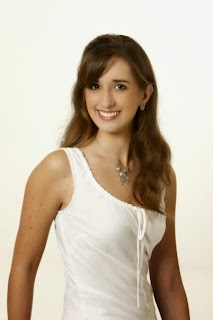 Anne Elisabeth Stengl makes her home in Raleigh, North Carolina, where she lives with her husband, Rohan, a kindle of kitties, and one long-suffering dog. When she’s not writing, she enjoys Shakespeare, opera, and tea, and practices piano, painting, and pastry baking. She studied illustration at Grace College and English literature at Campbell University. She is the author of the Tales of Goldstone Wood, including Heartless, Veiled Rose, Moonblood, Starflower, and Dragonwitch. Heartless and Veiled Rose have each been honored with a Christy Award, and Starflower was voted winner of the 2013 Clive Staples Award.


To celebrate the launch of GODDESS TITHE, Anne is offering two proof copies as prizes! For a chance to win, enter the Rafflecopter drawing below.