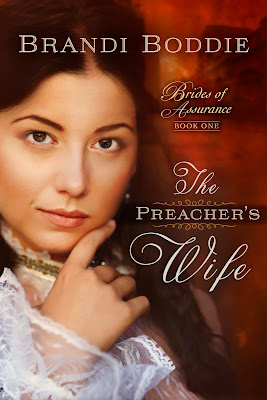 Today is the official release day of The Preacher's Wife. I've been counting down the weeks and days for what seems like forever, but there's no more waiting now. Announcing the kickoff to The Preacher's Wife Book Launch and Blog Tour!


Can this small-town girl trade her tarnished past for a respectable life?
During the hot, windy summer of 1870 in the burgeoning prairie town of Assurance, Kansas, Marissa Pierce is fed up with her abusive boss. She longs to start a new life and is growing weary of convincing townsfolk that she is most certainly not a prostitute.

Civil War veteran and preacher Rowe Winford arrives in town intent on leaving the tragic memories of his deceased family behind. Although Rowe has no plans to fall in love anytime soon, the plans of God rarely match those of man.

Faced with adversity and rejection from the town and Rowe’s family, can Marissa overcome her past, renew her faith, and experience the life of love that God has planned for her?

An excerpt from the novel:

This excerpt takes place shortly after Rowe arrives in Assurance, Kansas. Marissa sees him on her way to deposit the saloon’s earnings in the bank. The town’s gossipy seamstress Linda Walsh stops to have a word with Marissa about the new preacher.


“That must be our new preacher.” Linda Walsh, the town’s young seamstress, walked up beside Marissa. Always eager for conversation, Linda would speak to anyone who stopped to listen, as Marissa had learned since coming back to Assurance a couple years ago. “We weren’t expecting him for another two weeks. I wonder what made him take off from home so fast.”


Marissa groaned at the thought of meeting another preacher. Every preacher she came across had turned her away once they discovered her profession.


She watched the small schooner pull up to the local inn. She recognized the driver Dusty Sterling seated beside the other man. Dusty hopped down and tethered the horses. The man in black stepped onto the dusty curb. His recently polished boots gleamed.


“Fancy one, he is,” Linda continued. “I hear he comes from a city somewhere in Virginia.”


“Where did you hear that?”


“It was in the paper a month ago. Our advertisement for a new preacher was answered from a man back East.”


Marissa focused again on what was in front of her. The traveler indeed looked foreign to the prairie. Not a hint of travel dust stuck to his long, black frock coat and four-inhand necktie, probably changed into just before departing the train. His gray pants were new and expertly tailored. He removed his hat briefly to wipe his brow, and Marissa saw the dark, wavy hair cropped close to his head.


“He doesn’t have a wife or children with him. Such a shame.” Linda clucked her tongue. “He’s a handsome fellow, for certain.”


Marissa agreed with her on that. He must have stood over six feet tall, with broad shoulders and a powerful build. The man’s profile was strong and rigid, his square jaw and straight nose a true delight for the eyes. Assurance’s former preacher, Reverend Thomas, did not look like this. “Would having a wife and children make him a better preacher?”


Linda tossed her a look. “That’s got nothing to do with it. One ought to be settled down at a certain age, wouldn’t you say so? Instead of running wild with the barmen?”


Marissa absorbed the sting of emotional pain. Anything she said in response would not sway Linda or anyone else’s notion that she was just a beer-serving streetwalker. She put on a polite stoic face. “I’m sure the ladies of this town will clamor for his attention. Will you excuse me, Miss Linda? I should be going.”


She left the seamstress just as Dusty carried the new preacher’s valises inside the inn. The preacher moved to follow then stopped short, pausing for Marissa to walk past. Marissa saw his blue eyes widen and take in her entire form, from the feathered hat on her head to the dainty-heeled boots on her feet. By his expression she didn’t know whether he admired or disapproved.


His lips settled into a firm line of what looked to be distaste, and she got her answer.


The preacher hadn’t been there for an hour and already she drew out his scorn. Marissa returned the stare until her image of him blurred with beckoning tears.


He jolted from his perusal. His low, straight brows flicked. “Good day to you, ma’am.” He amiably tipped his hat to her.


She paused, not used to being addressed in that fashion. Kindness was in his greeting, not the sarcasm she normally heard from others. Marissa tilted her head to get a clear look at him. His eyes were friendly, calm deep pools. The rest of his face, with its strong, angular lines, remained cordial.


“Good day,” she replied, hoarse. Awkwardness seized her person. Marissa hastily
continued on her way to the bank.

Want to read more? To celebrate the book's release, I'm having a giveaway for a signed proof copy. It's easy to enter. Just click on the link to enter your email.

The drawing will be held from October 1-26. The winner will be notified on October 27. Good luck!

In the meantime, check out my fellow blogger friends who will also be participating in the tour throughout October. Check back often for updates.

Between You, Me and the Gatepost